One night in New York City, I happened upon a mafia hit, the result of competition for leadership of the Gambino crime family. Current events take me back to that night.

After law school I worked as a corporate finance lawyer at a prominent law firm and spent 10 years in the firm’s New York City office.

My wife and I had both grown up in the West and, to us, the East had always been distant and forbidding.

“It will be an adventure!” I said to her cheerfully. “We’ll spend a couple of years out there, and then move back West.” She glared at me.

I went out ahead to work and look for housing.  For a week or so, I wandered Manhattan in the evenings, searching for an affordable apartment.

On one of those nights, as I made my way back to my humble Lexington Avenue hotel, I passed Sparks Steak House on 46th Street, close to Third Avenue.

It was the night “Big Paulie” Castellano, head of the Gambino crime family, was gunned down on his way to dinner. Police tape closed off 46th street. Lights were flashing. Sirens blared. Bodies were still lying in the street, covered with sheets. 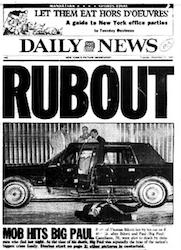 John Gotti, who had ordered the hit, would become head of the Gambino family. Guess he thought he could do a better job than Castellano.

“Better not tell my wife about this,” I thought, as I skirted the crime scene.

This was a dramatic introduction to an ugly part the City at that time. The mafia was distinctly present and projected an image of being above the law, cocky, arrogant and unrepentant.  Just look at this mug shot of John Gotti.

At that time, some in the New York business world seemed to have inherited mafia-like arrogance, rudeness and winner-take-all attitudes. They showed little concern for relationship and trust. In negotiations, I experienced their blatant misrepresentations, threats, verbal abuse and crudeness.  This always injected stress, distrust and delay in the transactional process.

At law school, in my business negotiations class, I had learned that a negotiator will more quickly achieve optimal outcomes with a collaborative approach.  Humility, listening, honesty and respect build trust, foster cooperation and reach mutually beneficial outcomes.

In the face of the belligerent, bullying New York business style, I consistently applied what I had learned in school. My team succeeded in getting hard things done quickly and our practice grew.

This experience keeps coming back to mind (and you can probably guess where I am headed with the story).

I shudder watching from afar the negotiation style of our new President. So far, his lurching administration has left more bodies “lying in the street” than John Gotti.

This approach to “winning” shows little regard for the “other side,” or the greater good, and, with huge arrogance and a small attention span, fails to understand issues, details, process or people.  It is, to me, mafia-like and poisonous to the political setting.

Our governing institutions, with checks and balances, exist to reach collaborative solutions and achieve optimal outcomes for the whole country, without regard to political party, group identity, winners or losers.

As citizens, we must demand collaboration and resist the “me-first” attitudes promoted by the new administration and worse-than-ever partisanship.

Those attitudes are causing our country, and the world, to become more fearful, angry and divided—and more dangerous and dispirited than ever.