The debacle of the Reagan nomination of Judge Robert Bork to the Supreme Court and the US Senate’s rejection was the first warning to a young lawyer of the progressive degradation of the Court and its role in our democracy. 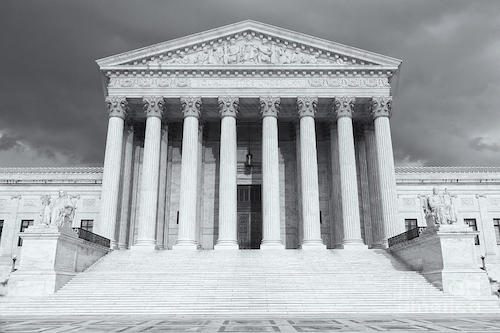 Bork  bôrk/verb, US informal, to obstruct (someone, especially a candidate for public office) through systematic defamation or vilification. “We’re going to bork him,” said an opponent.

Over the past few decades, and particularly since the Reagan Era, we have witnessed a “sweeping politicization” of the Supreme Court nomination and approval process.

In my lifetime, the first most dramatic example of this was the nomination and rejection of Robert Bork, who was to replace Justice Lewis Powell, the then “swing vote” at the Court. 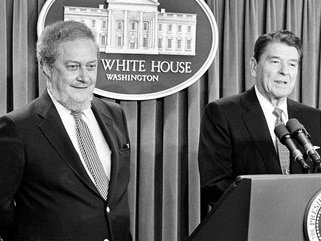 President Reagan presented Bork as a “moderate” to replace Powell, although it was apparent Reagan intended to swing the Court to a majority five-member conservative bloc.  (Sound familiar?)

“Robert Bork’s America is a land in which women would be forced into back alley abortions, blacks would sit at segregated lunch counters, rogue police could break down citizens’ doors in midnight raids, schoolchildren could not be taught about evolution, writers and artists could be censored at the whim of the Government, and the doors of the Federal courts would be shut on the fingers of millions of citizens.”[1]

In the Democratic-controlled Senate, Bork’s nomination was defeated in the Judiciary Committee 9-5; then, after Bork insisted on going ahead with a vote of the full Senate, it was rejected on a 58-42 vote (with 2 Democrats voting in favor and 6 Republicans voting against).

[Significant historical fact:  Bork’s rejection ultimately led to the nomination and confirmation of Justice Anthony Kennedy, who became the Lewis Powell swing voter of the modern era, and for whose seat President Trump has nominated Judge Brett Kavanaugh.]

I had briefly met and worked with Bork in 1980, just before his appointment to the United States Court of Appeals for the DC Circuit.  I was a law student on summer clerkship, assigned to an antitrust case pending before the United States Court of Appeals for the Seventh Circuit.  Bork was the anti-trust expert who argued the case. Together, one-on-one in a Chicago conference room, I shared my research and he tested with me the outline of his argument.  He seemed smart, practical and charming, not consistent with the persona later painted by Senator Kennedy.

Because I had met Bork, I watched the battle over his nomination with some sorrow, for him and for the process.  It was a dramatic, nationally-broadcast display of being “borked” and of the corrosive politicization of the Supreme Court nomination and approval process.   It is a process that has been replayed, with more or less drama, several times since, under multiple administrations and congresses, culminating in a Republican Senate’s treatment of the Obama nomination of Merrick Garland and now Trump’s nomination of Kavanaugh.

To be clear, I am writing about the process, not Bork or Kavanaugh–or Garland.  The process is partisan and poisonous, and it continues to erode the Supreme Court’s objectivity and independence.  As for the candidates themselves, those most politically expedient are rarely the best jurists.  The quality of our courts has fallen victim to our hyper-partisanship.

For example, I am convinced Bork was Reagan’s best political choice in the 1980s, rather than the best legal mind available.  (His originalist theories now sound shallow and partisan.  His consumer-focussed approach to antitrust law has been debunked.)

Same can be said about Kavanaugh and other conservative judicial nominees under Trump.

In short, partisan politics has corrupted and dumbed down our courts and it has had, and will continue to have, dangerous effect on our democracy.

Bork himself spoke to this concern.  After the defeat of his nomination in committee and before the Senate vote, he implored:

The process of confirming justices for our nation’s highest court has been transformed in a way that should not and indeed must not be permitted to occur again.

The tactics and techniques of national political campaigns have been unleashed on the process of confirming judges. That is not simply disturbing, it is dangerous.

But when judicial nominees are assessed and treated like political candidates, the effect will be to chill the climate in which judicial deliberations take place, to erode public confidence in the impartiality of courts and to endanger the independence of the judiciary.[2]

It has “occurred again,” now for thirty years.   With the Kavanaugh nomination (and all the other Trump conservative appointments to the federal courts), Trump will establish for decades a partisan imbalance that will erode public confidence in the impartiality of our courts and continue to endanger the independence of the judiciary.

As another pawn in this pernicious politicized process, Kavanaugh should not be confirmed.  The Senate should withhold confirmation until presented a candidate untainted by partisan politics, the best legal mind available and a record of focus on just doing the job of interpreting, not making the law.

At the least, the Senate should not vote until after the mid-term elections.  The people should have a voice.  After all, this is “about a principle, not a person.”[3]

One thought on “To Bork or Not to Bork — That is the Question!”