Idaho Trump voters take note:
The Trump tax plan, as announced, is clear proof that a vote for Trump was a vote for making the already-rich richer.

The Trump proposed tax cuts, which promise to add trillions to the national debt, must be putting our Idaho federal delegation in a real bind. They have consistently campaigned on the traditional Republican planks of reducing deficits and the national debt.

Surely, our Idaho Senators and Congressmen will oppose the Trump tax plan.

Rolling out the plan this week was another 100-day trick, supported with the usual marketing hyperbole and unusually-bad economic analysis.

Here are at least three of the falsehoods behind this maneuver.

Falsehood #1: US companies are uncompetitive because of the high US corporate tax rate.

The statutory tax rate may be high compared to other countries, but the actual (or “effective”) tax rate for US corporations is always lower, after the many deductions and loopholes available to American businesses.

More specifically, the statutory tax rate is 35%, but after exclusions and deductions, the effective rate is, more-often-than-not, zero percent (0%). A March 2016 Government Accounting Office (GAO) report shows that most US corporations paid no taxes between 2006 and 2012. 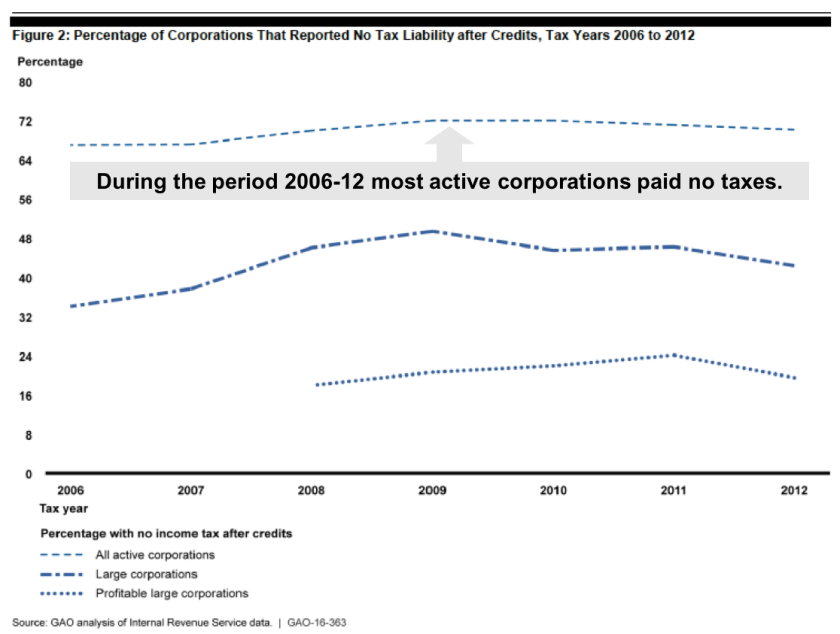 This argument is based on the same faulty economic logic that justified the Reagan and Bush era tax cuts. That logic was (and is) that tax benefits for corporations and the rich will “trickle down” to the poor.

However, trickle-down economics has never worked in the real world and would better be described as “drip-drip economics.” Tax savings for corporations and their owners will more likely make their way into bigger homes, private jets and longer yachts, with little if any broad-based economic boost for everyone else.  Meanwhile, the national debt will skyrocket.

“There are two ideas of government. There are those who believe that if you just legislate to make the well-to-do prosperous, that their prosperity will leak through [trickle down] on those below. The Democratic idea has been that if you legislate to make the masses prosperous their prosperity will find its way up and through every class that rests upon it.”

Falsehood #3: The middle class will benefit from the tax cuts.

OK, sure, this sounds good. Who would not want a tax cut?  But who really benefits?

The already rich population will benefit most. Trump’s promises to the middle class amount to pandering to the non-rich to give greatest advantage to the already-rich.

Among the most-advantaged beneficiaries will be the Trumps, his cabinet members and his circle of super-rich friends and advisors.

“Regardless of the plan’s fate, Mr. Trump has already sent a strong message about where his sympathies really lie. They lie not with the working people who elected him, but with the plutocracy that envelops him.”